What Teens Actually Do Online Will Surprise You

There’s a famous scene in American Pie that captures the internet in its emerging 90s glory.

The bumbling main character Jim strips and dances around his bedroom to some sweaty Ibiza trance as European exchange student Nadia claps him on from his bed. Watching on as well through the lens of his webcam are hundreds of his classmates as their sticky rendezvous is accidentally live-streamed to the whole school instead of just his close friends.

His pixelated, blurry humiliation spread through the state of the art phone line internet of 1999 was the first real depiction in a movie ever of what teenagers actually do online. Because back in the 90s any mention of “the net” and “cyberspace” in blockbuster movies had to bring with it scenes of cyberpunk hackers, viruses, aliens, identity theft, walls of rapidly-falling green text, ridiculously advanced government spying techniques and technology which would doom the world to annihilation.

It was obvious what Hollywood thought. “The web” in the hands of 90s film-makers, when not all that many people even had it in their own homes, was like a blank cheque to go wild with their imaginations. They could practically write whatever they wanted and say “because internet” and we’d believe it. It wasn’t hard to suspend the belief of naive 90s audiences, most of who had absolutely no idea what this internet thing was capable of except that it seemed to be almost anything.

Even defeating aliens using a Mac…

Then American Pie came along and showed us what the internet was actually mostly about. Even though it was a whole 20 years ago and tech has now advanced, teenagers today like then are still obsessed with using the internet as a way to look into each other’s lives. And to show off their own.

While the idea of live-streaming an unsuspecting semi-naked school girl hasn’t really aged that well, turning a camera on yourself for other’s enjoyment as Jim did is what is actually done by millions of people all over the world everyday today. American Pie truly saw the future of the internet. (And an honorary mention should go to Sandra Bullock ordering a pizza online from “pizza.net” while at home all alone logged into ‘cyberchat’ in The Net.)

Back in the late 90s as young people started cottoning onto this great connective ability of the internet, ICQ (I Seek You) was the go-to service for instant messaging. Now of course everybody uses social media. But just as ICQ would now seem like a strange relic of history to Gen Z (even though it bizarrely actually still exists), there’s every chance that any of the big social media platforms of today could lose popularity and go the same way as the Yahoo! and MSN messenger tombstones’ in the instant messaging app graveyard before them.

In fact with Gen Z this migration is already happening.

What teens actually do online

Year13’s YouthSense research surveying over 1000 15 to 24-year-olds, with 90% of respondents aged 15-19, has found out what Gen Z are actually doing online. Just 14% said they use Twitter regularly. Very realistically it could be the first major social network which doesn’t survive Gen Z. On the other hand 95% said they use Instagram regularly meaning pretty much every teenager you look at today is using it.

Instagram being Gen Z’s favourite social network would no doubt have Mark Zuckerberg sleeping a little easier. Reason being just 74% of our Gen Z respondents said they use Facebook regularly, a number which Zuck with his wealth of data analytics would be acutely aware of. In other words, Facebook’s famous astronomical growth is probably done and dusted.

But the Gram, which he bought for $1 billion in 2012, being in the hands of practically every Gen Z means it is now what is actually taking his publicly-listed social networking behemoth into the future. When he inked the deal though Facebook could do no wrong. The bags of money to buy Instagram came from its skyrocketing success. But a lot has changed in seven years. With a quarter of Gen Z’s not using Facebook regularly, it’s now the daggy parent to the younger, cooler Instagram. 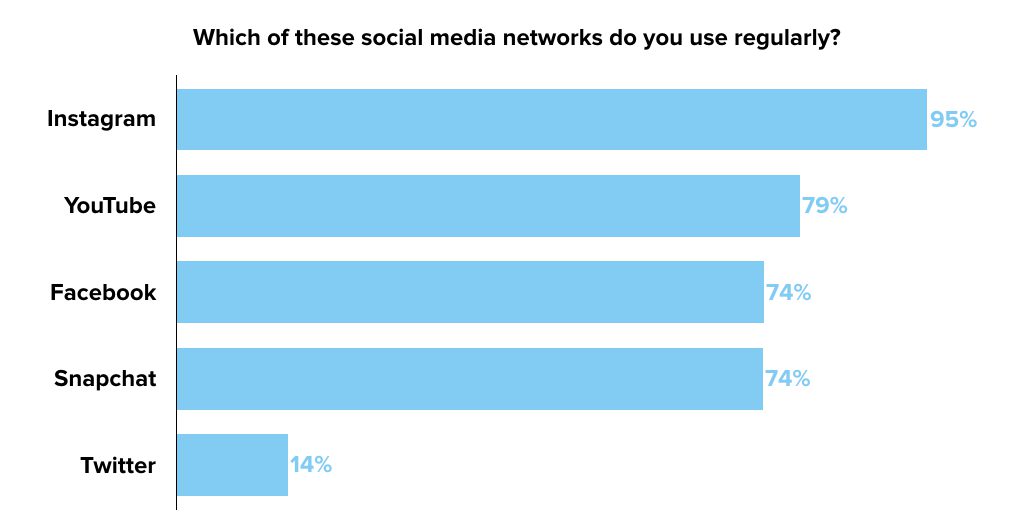 Most surprising of all is Snapchat. Just 74% of Gen Zs said they use it regularly. While it’s nowhere near Twitter’s level of irrelevance with Gen Z, the fact that it’s equal with Facebook despite being an app directly targeted at young people would undoubtedly be a kick in the guts for its owner Evan Spiegel. When Instagram stole Snapchat’s most innovative feature – stories – it evidently took its thunder along with it.

We also checked what specific activities young people are spending their time doing online. Chatting was by far the most popular with 85% doing it daily. Snapchat with its disappearing messages was revealed to be where they most like having private convos with their mates. 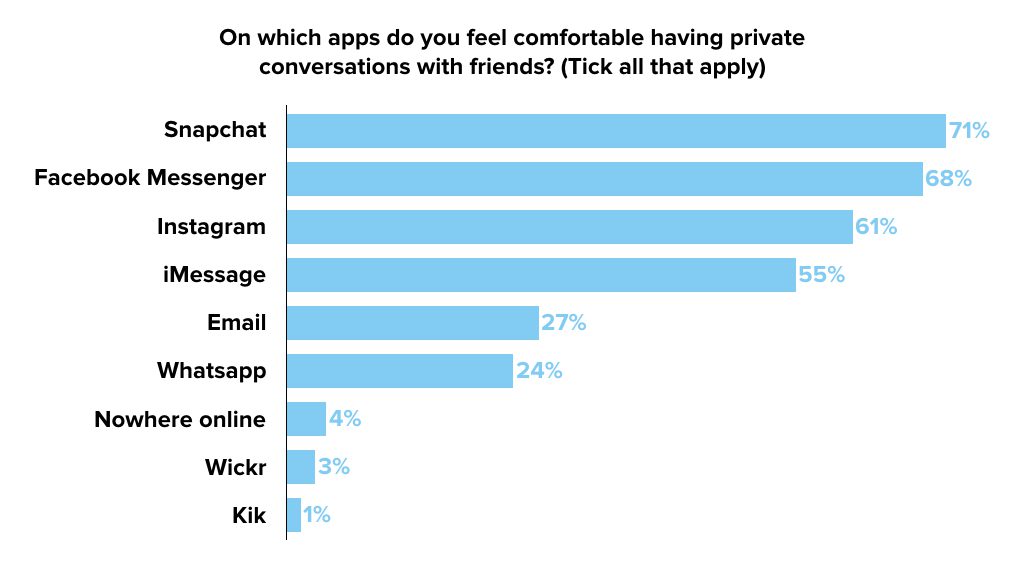 As well, watching videos, TV shows and movies online was done by 69% of respondents everyday. YouTube is Gen Z’s favourite streaming service used by 91% of them. It even beat out the much hyped Netflix which 84% use. Spotify used by 80% of Gen Zs is their favourite music streaming service. Apple Music doesn’t even come close. As the graph below shows with Gen Z there are a few big streaming players while everyone else fights for the scraps. 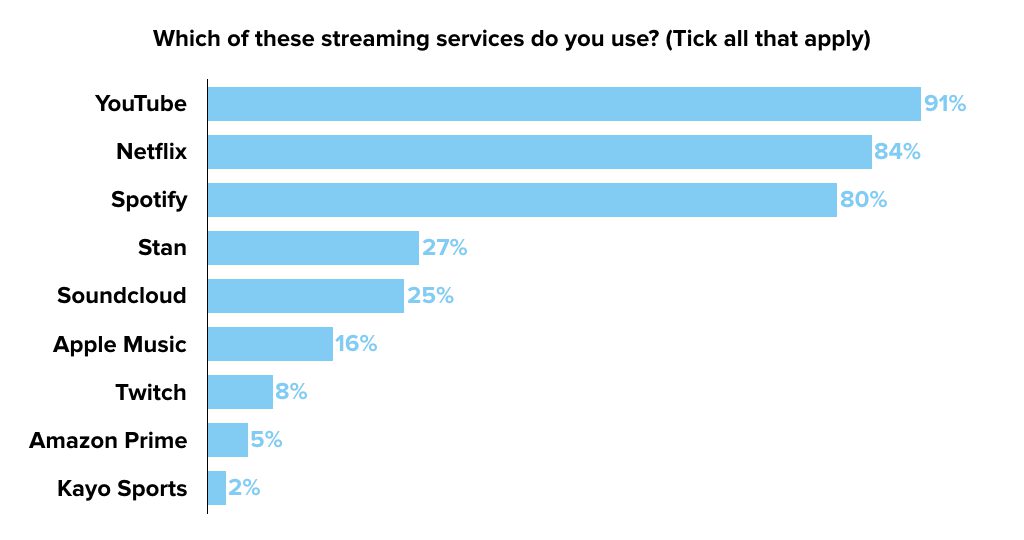 Then the numbers fell off a cliff with the activities Gen Z do online. Just 26% of them said they consume news daily online. Also surprising was only 20% saying that they game online each day. In fact, 40% of Gen Z’s said they never game online at all. It’s clear then that Gen Z are not a generation of gaming addicts as many like to stereotype them.

And remember blogging? It’s a word which typifies the happy days of mid-2000’s internet. A time after all the paranoia and fear had died down but when it hadn’t yet become seeped into every waking moment of our life. Before social media having your own piece of internet real estate as your public diary was the only real option people had to get their thoughts out to the world save for letters to the editor, talkback radio or hiring a skywriter. 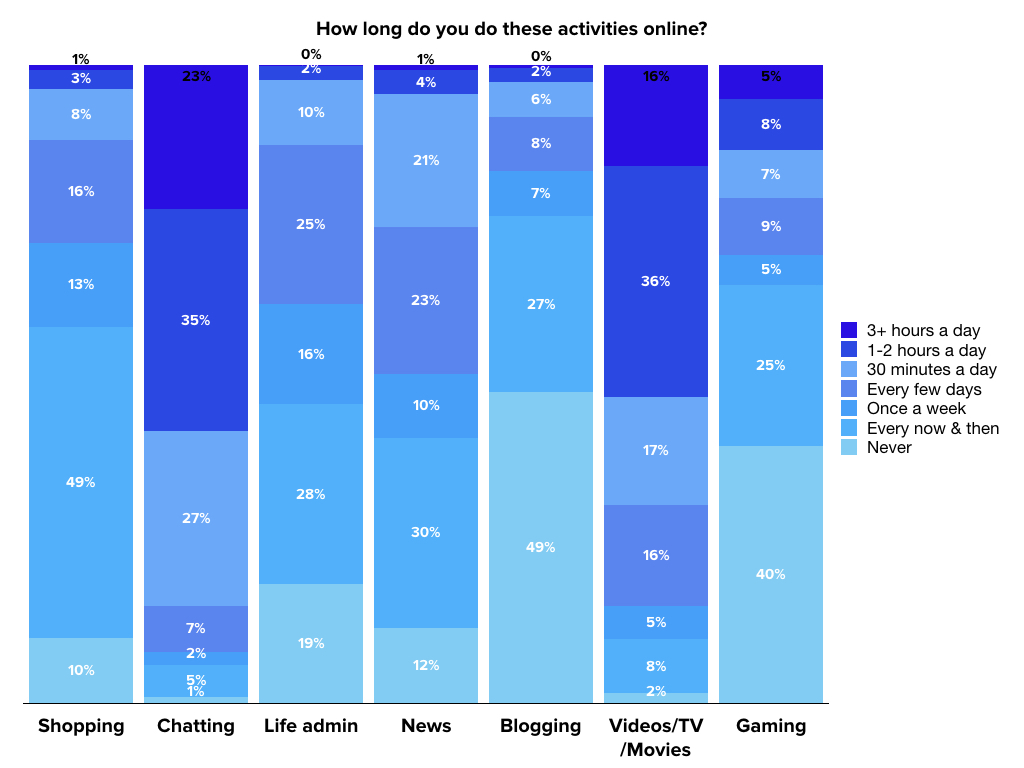 So what do Gen Z think of blogging? Evidently not much. Just 8% told us they read or write blogs daily, with 49% never blogging at all. If you’ve never heard of micro-blogging site Tumblr then that’s probably why. In its place vlogging (video blogging) by young YouTubers has taken off in popularity with 79% of Gen Zs using YouTube regularly, many to tune into each other.

Also despite 90% of our survey audience being aged 15-19, 41% of them said they did online shopping at least once a week or more. With many not yet even having their own credit cards, but with the rise of services like AfterPay, there’s little doubt this figure is only set to rise as they find work and financial independence from their families.

It’s funny how things become truths even when they’re not. Just like with 90’s internet-paranoia films, repeat enough stories today about teenage Twitter beefs and high school gaming addicts and voila! An image is set in stone. But like we’ve done before with teenagers and money, we use statistics direct from Gen Z to break these untruths down. The result – you can engage with young people confident that you know what’s actually happening in their lives.

As we move into the 2020s it’s Instagram on top and surprisingly, despite its media-fuelled hype, Twitter which could be the first current big name destined to join MSN Messenger in the internet graveyard. Snapchat and Facebook too with a quarter of young people not using them regularly could be at the start of a downwards slope to who knows where.

What teens actually do online today – and probably always will do – though is at once more diverse but at the same time not all that different to what they’ve always done. The apps and the big name players change, as does the speed and mobility we use it at, but at the heart of it the goal remains the same – to communicate, have fun, be entertained and be informed.

But as we’ve learnt since American Pie if that involves putting someone naked on camera, then please for the love of god, make sure they know about it. The consequences today could wind you up in prison and not just a hilarious movie scene.

13 Reasons Why Gen Z Stress About Their Parents