Do you remember how hard it used to be to become famous?

You’d need an overzealous stage mother, or father like in Michael Jackson’s case, trying to live out their dreams vicariously through you. You’d have to do castings. You’d have to play on street corners and hope the right person heard you. You’d have to try and land a spot on a major network TV show. Or you could take the dreaded reality TV route. And no doubt you had to kiss a lot of ass or worse if Harvey Weinstein was involved.

Today, however, the barriers for entry have dropped to basically nothing. Assuming you have some talent, some X-factor, then all you really need is an internet connection and a phone. That’s it. Then it’s just a matter of having the guts to put your first video online for the world to see. Planning, producing, filming, editing, uploading – you can do it all yourself.

This YouTube video of her first hit single Jungle recorded in her living room rocketed her to fame literally overnight. It was uploaded in early 2016, by 2017 she was touring all over the world and in 2018 she was lighting up stages at Coachella and Lollapalooza. Now she crushes it wherever she goes.

But before she clicked upload on that no-frills YouTube clip Tash had spent years busking on Melbourne’s streets. That “right person” apparently never walked by and spotted her talent. But with YouTube water has a funny way of finding its own level.

Such success though just last decade would have only been possible with a big studio. Their money, their power, their equipment, their connections – all that you needed. Now it’s them that need you. The record execs hearing Tash Sultana on YouTube were the ones hunting her down. Now she dictates the music she makes on her terms and not the other way around.

But the truth is once-in-a-generation talent on the level of Tash Sultana isn’t needed to become famous today. You just need to upload “good content”. If you’re making good tunes you can start out by putting them on Soundcloud and YouTube. And if you want to be on camera and can make people laugh, offer interesting insights on whatever it is you’re passionate about or teach people how to do things then you can become famous in your own niche on YouTube.

PewDiePie is the ultimate example of this – a YouTuber who became YouTube’s first true megastar. From humble beginnings streaming himself gaming, coupled with his X-factor to standout from the crowd, he uploaded consistently and interacted with his audience.

It’s this two-way relationship where fans and YouTubers “like and comment back” which has set the YouTube stars of today apart from the celebrities of yesteryear. Accessibility leads to relatability which leads to likability, and in the end, a growing and devoted audience.

The Swede now has over 100 million subscribers and reportedly rakes in over a million bucks a month. He’s not relying on other writers, producers and studios to give him work. He’s making it all happen.

While some people might scoff at being “internet famous”, for Gen Z and their favourite YouTubers that just simply means being famous. The internet however has brought its own style of fame. A fame which can be even more influential with Gen Z than traditional celebrities. It’s ‘Fame 2.0’.

Year13’s YouthSense research surveying over 1000 15 to 24-year-olds across Australia has found 91% use YouTube. It beat out the likes of Netflix and Spotify to be the most popular streaming service for Aussie Gen Zs. 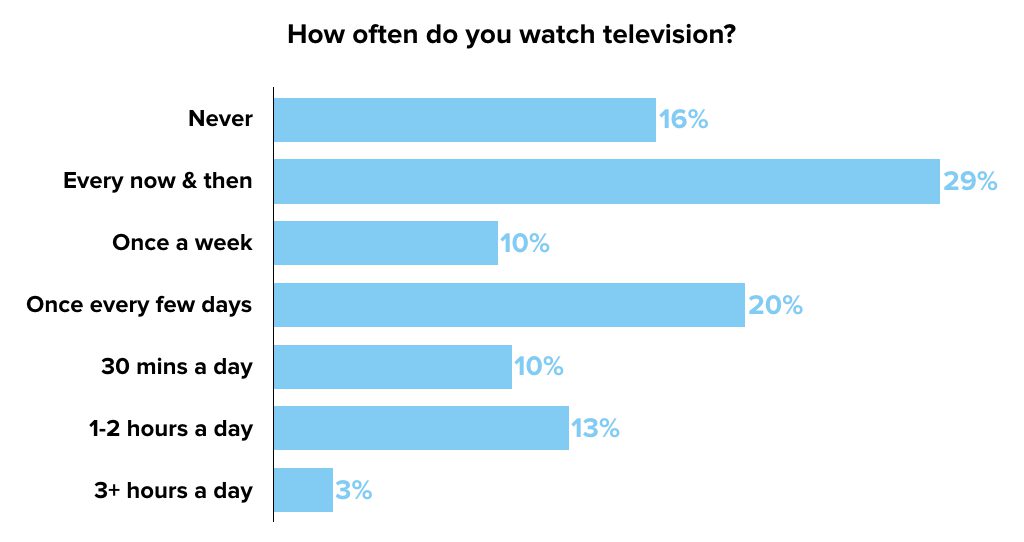 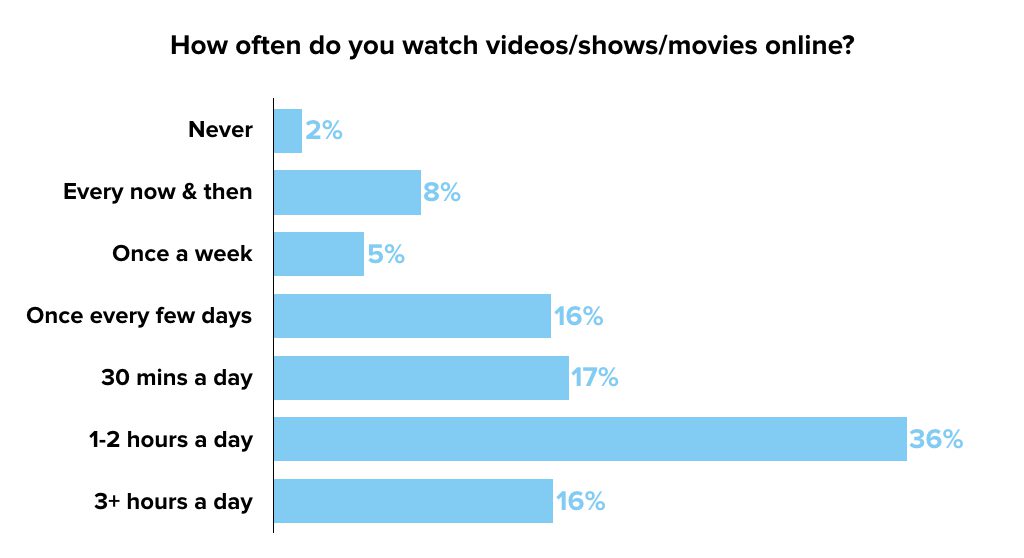 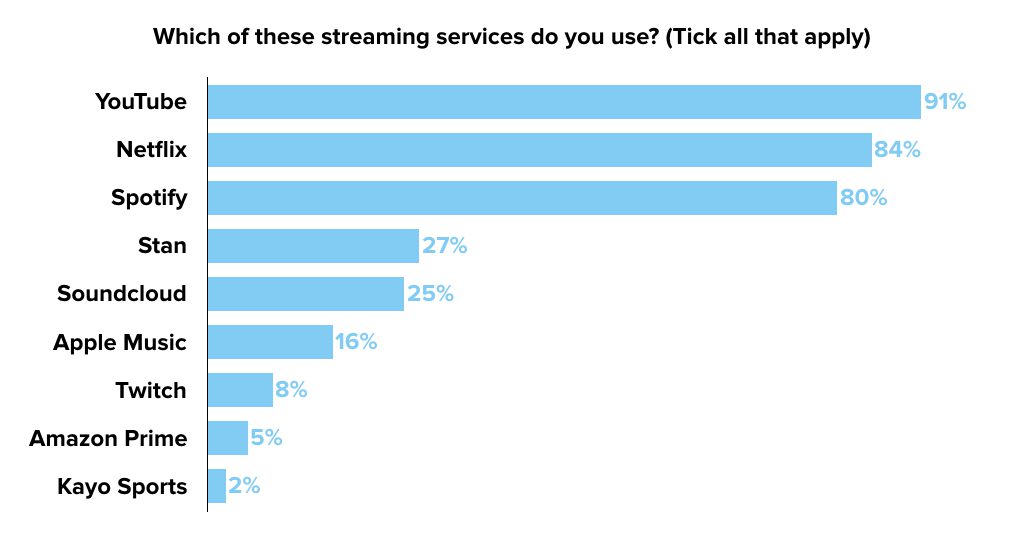 With our research finding Gen Zs are watching less TV, listening to less radio and hardly reading newspapers or magazines, online juggernauts like YouTube, Netflix and Spotify have well and truly taken over.

They’re part of a host of exclusive YouthSense findings into young people’s media habits which can be found in our free report What Gen Z Actually Do Online – Social & Digital Media Trends 2019. 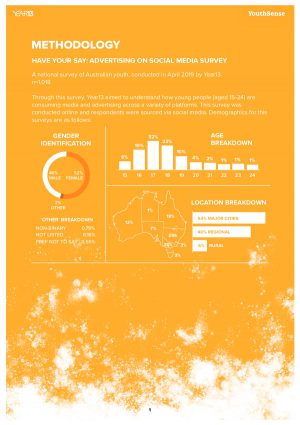 Across the world 1.9 billion people use YouTube each month. Five billion videos are watched daily with an average viewing session reportedly clocking in at 40 minutes.

Since it was created in 2005 50 million people have shared content. While many just share something casually, YouTube’s popularity with teens and twenty-somethings has been thanks to its army of YouTubers who take it a little more seriously.

According to Google, who own YouTube, young people “are breaking conventional consumer rules. They’re just as likely to seek style tips from a fashion vlogger as they are from a traditional celebrity. Recognising this shift, smart brands have partnered with YouTube Creators to build powerful marketing campaigns.”

The upshot of all this – YouTubers are some of the best people to communicate with Gen Z today.  While they start out as entertainers, many also become clever marketers. A 22-year-old from Tasmania in our survey told us this was the case.

“YouTubers sharing their own experience and opinions on a product seems to be one of the most effective ways to market and advertise! At least with the people I’ve spoken to,” she said.

A 17-year-old from NSW told us sponsoring YouTubers worked a lot better than having ads at the start of a video.

“It really shows a connection to the content and also builds trust in the advertiser,” he said.

Worse than ads at the start of a video according to a 21-year-old from NSW were ads which abruptly appeared during her YouTube sessions.

“Interrupting a video for ads is frustrating and makes me less inclined to trust a brand or feel favourably towards it,” she said.

But while YouTubers are a natural way to communicate with Gen Z on their level, it has to seem organic and real. Case is point, FunForLouis’s fans were divided over the computer promotion in the video above as it felt like a clear ad.

A 19-year-old from NSW told us she preferred brands being integrated with YouTubers lives.

“For example, a YouTuber who is doing a ‘what I eat in a day’ video talking about a gluten free brand that has sponsored them, because they actually use it and it’s actually made a difference to their lives,” she said.

“It’s much more appealing than someone who reads a script talking about a brand in the first 30 seconds of their video. I almost always click away from those videos because it makes me feel like the brand has offered them a lot of money to say exactly what they want them to say, and it makes me feel like I’m watching TV. It feels so commercial and fake.”

Case in point again, this promotional video about cameras by FunForLouis was more successful as it felt more natural. A 17-year-old from Victoria said he thought promotions like this felt more genuine.

A 21-year-old from Western Australia said he liked it when YouTubers spoke about the brand in their own words.

In with the new

As TV sinks in popularity with Gen Z YouTube has risen to the top. It’s transformed itself from a shaky home video depository into a star-making factory. These self-made YouTubers now have just as much if not more fame and influence with Gen Z than traditional celebrities.

While Gen Y grew up glued to the box before illegal downloads started pulling them towards watching movies and shows online, now streaming has made the migration well and truly complete with Gen Z. Young people today almost exclusively consume media online and if you’re trying to reach them but you’re not there then you might as well be shouting to an empty room.