Our phones and computers when turned off leave us staring back at a dark reflection of ourselves.

They’re called our black mirrors. Taken on a deeper level the name begs the question of whether technology reflects our dark sides. Is it really a mirror to all of our worst tendencies? Many argue without a doubt that it is. Social media especially, which is baked into these devices, is blamed for many of the ills of the world today. Rising populism and authoritarianism, election rigging, left/right polarisation and disinformation can all be traced back to it.

Year13’s YouthSense research has found 95% of Gen Zs use social media everyday and 44% say they’re addicted to it. When it comes to how much time they’re clocking up on it per day, 42% say they spend over three hours and 39% between one and two hours a day. 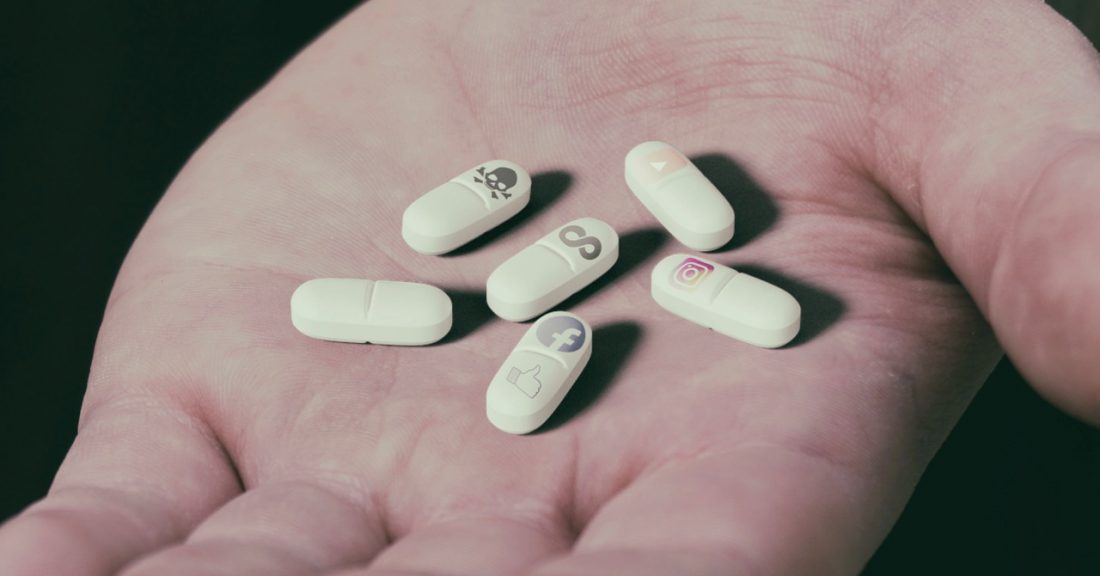 In the worlds of young people social media apps like Instagram are criticised for the unhealthy beauty and masculinity expectations they propagate thanks to the impossibly-perfect filtered lives of ripped bros and toned and curvy models. For how “friends” posting happy snaps from the weekend can subtly exclude others who weren’t invited with the click of a button. And for the sheer toxicity of the endless arguments and bullying which scream through comments sections and DMs.

It’s a horrible reality that too many young people have switched off their device, stared back at that dark reflection of themselves one last time before ending their lives. Whatever was happening on that screen having broken their will completely.

Suicide is the leading cause of death for young Australians. About 350 young people aged 15–24 take their own lives every year, which is more than die on the roads. However, for every youth suicide there are upwards of 100 to 200 more attempts. With suicide the second leading cause of death in 10-24-year-olds globally, evidence suggests social media is increasingly playing a role.

A 2019 review published in the Current Opinion in Psychiatry investigating social media, internet use and suicide attempts by adolescents found seven studies which have found an association between increased screen time and worse mental health in young people. However, it said evidence suggests that the relationship between internet use and self-harm and suicidal behaviour is mixed, with it also able to foster a sense of community by offering isolated young people sources of support.

One study it cited found a third of young people with a history of self-harm had used the internet to seek help for it. Over half of those people who sought help felt they had more support available to them online than offline. The anonymity of the internet allowing many young people to express themselves and find support more easily than they would otherwise in everyday life.

The review concluded that current evidence suggests that excessive or problematic use of social media increases the risk of suicide attempts but that longitudinal studies of different population groups are needed to better understand its risks and confounding factors.

As this research has found, social media can be both harmful and supportive. But for anyone hearing the negative headlines it’s easy and indeed perfectly understandable to just see the worst in social media. Especially for anyone who’s not well versed across the various Instagrams, TikToks, Facebooks, Snapchats, Twitters and YouTubes, you can’t blame them for thinking it’s all just a suck on society with nothing good to give.

When we surveyed over 1200 young Australians aged 15 to 24 about social media we found that 34% say they don’t present the real version of themselves on social media. Another 46% revealed they’ve been motivated to better themselves in areas like grades, sport, health and appearance just so they can post the results to social media. As well, 63% say they’ve intentionally limited their time on social media because they felt it would improve their mental wellbeing.

But even amidst the insecurity it breeds, Gen Zs still feel overwhelmingly positive about social media. When we gave them a series of 20 words (10 positive and 10 negative) to choose from for how social media makes them feel, the top four responses were all positive. 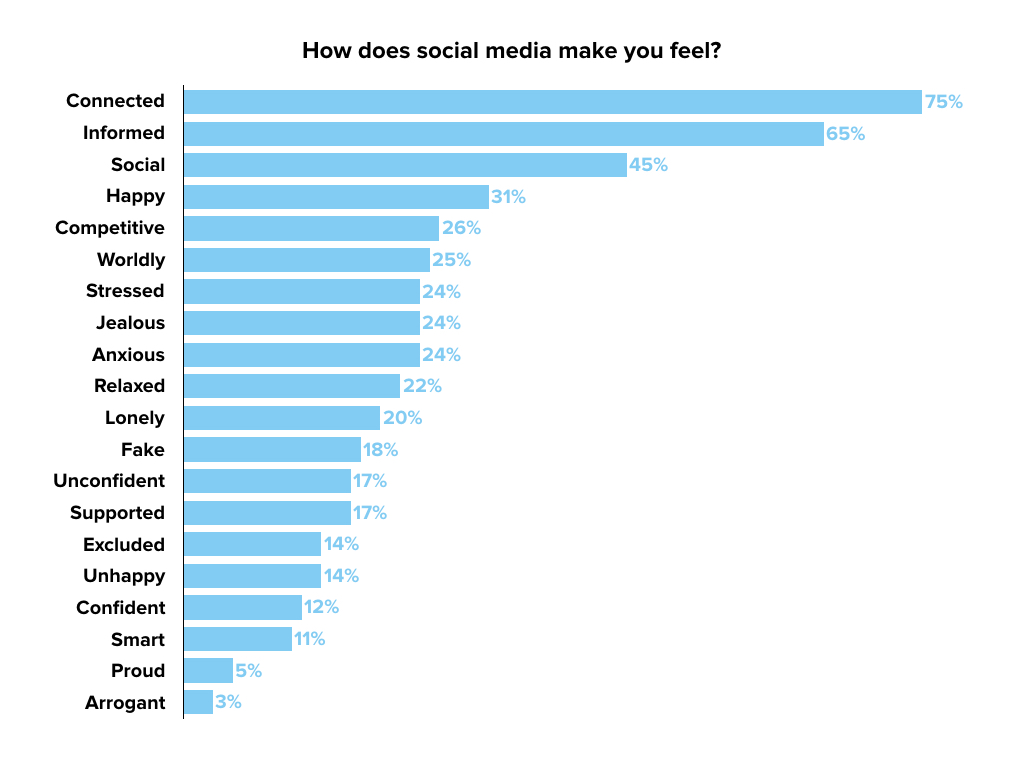 75% of young people say social media makes them feel connected. That ‘connected’ is the number one sentiment young people associate with social media backs up the studies which found its use for helping connect at-risk youth with support.

As well, 65% say it makes them feel informed. This is no surprise as social media is where young people receive their news and shape their views. It’s where their generation, led by Greta Thunberg, has been mobilised to demand greater action on climate change. It’s where social movements like #loveislove have sprung to life and overturned the weight of history and orthodoxy.

Upwards of a quarter of young people still do however associate social media with feeling anxious, competitive, jealous, stressed and lonely. Even with the positives it brings for the majority of today’s youth, it’s evident social media still causes angst for a significant amount of young people.

It’s apparent from our research that social media affects young people in ways those who didn’t grow up without it couldn’t imagine. Even though most of us now can’t imagine a world without it, social media and the knowledge about its effects on mental health is still very much in its infancy.

Despite the potential harms related to social media being widely discussed in homes and universities across the world, it’s an ongoing debate about just how serious and widespread they are in comparison to the supportive benefits it brings. As we’ve found, the majority of young Australians see social media as a positive influence in their life. Despite this, its negative effects on a smaller but significant amount of young people are potentially where the most focus and concern should lie.

How Gen Zs Want To Be Connected With Will Surprise You

3 Reasons Why Gen Z Aren’t Interested In Your Brand

Marketing to Gen Z is a lot like trying to be cool in high school – if you’re trying too hard, it shows, but if you don’t try at all, you’re irrelevant. Approach...

How Gen Z’s Values Impact Where They Want To Work

Drop fossil fuel clients, or lose Gen Z workers. That’s the stark message we can take from Comm Declare’s 2021 Fuelling Fantasies report, which concluded that the majority of under 30s (73%) are...

Is Any Cringe, Good Cringe?

It used to be ‘any publicity is good publicity’.  Today’s version? This headline. Cringe. We’ve all felt it, grimacing our way through embarrassing and out-of-touch content. But if people are cringing about you,...

Wired Magazine, your prediction from 2002 is right. “Twenty years from now, the idea that someone looking for love won't look for it online will be silly, akin to skipping the card...